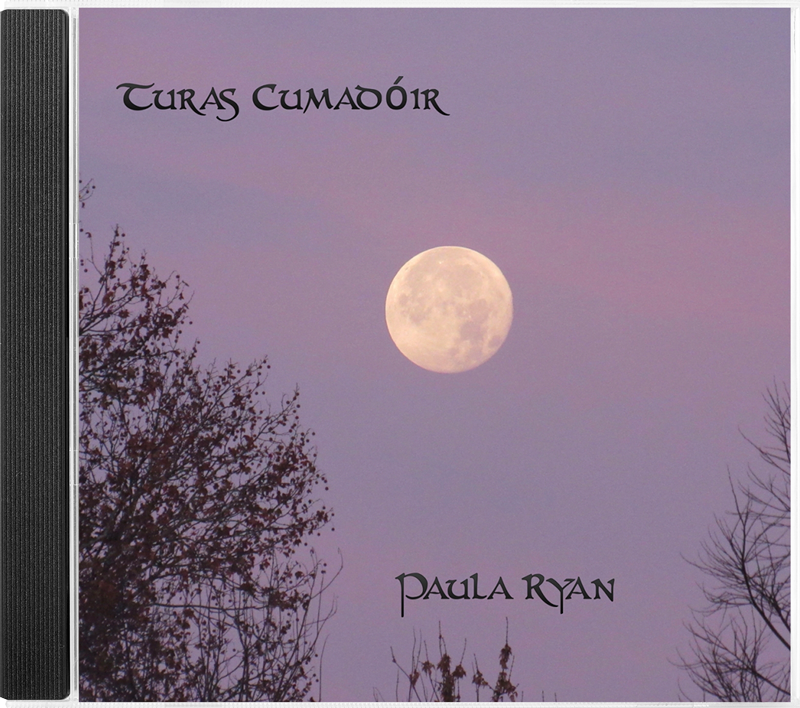 It is indeed a long way to Paula Ryan’s native Tipperary, considering the musical landscape explored here by the prolific singer, composer, and multi-instrumentalist – these new folk-songs take us on a fascinating trajectory from guitar-makers in Germany to songs like Ebb & Flow set in Thailand, reflecting the human stories behind the devastating Tsunami of 2004.

A long way and yet not. Paula’s compelling voice holds fast to her own Irish traditional influences and inflections, there in the smoky tones and bluesy sound across Paula’s first self-penned track of the album Vision. The album title is well-earned; Turas Cumadóir is a solo album in the most literal sense of that – Paula writes and sings her own songs – 12 in total, all song arrangements, instrumentals, including the well-crafted harmonies are all her own work. Paula also plays bouzouki, bodhrán, guitar, low whistle, saxophone, and marimba.

Stand-out tracks include Only a Cabinet Maker, a fascinating narrative about how the now renowned guitar-maker CF Martin was pilloried by warring craft-guilds of his time who refused to take him seriously as a gifted craftsman.

Pace and timing work well, songs with political overtones are interspersed with tongue-in-cheek irony deployed on tracks like My Handsome Irish Man.

There’s a notable tone of clarity across the songs, music that is melodically accessible but an edge of quirkiness throughout. The CD markedly underpinned by Paula’s voice is a melodic reminder that musical expression carries the power to take living stories to a new level.

No surprise to me to read that Paula’s compelling WW1 song O My Blue-Eyed One was award-nominated by the UK’s acoustic music magazine Fatea. It’s the final track, and in the closing, an apt, poignant and melodic return to Tipperary.

“A tremendous achievement… songwriting is very much at the forefront… hardly surprising that songwriting awards follow Paula around with such lyrically rich and consistent output… this album sets itself apart from many with the sheer variety of styles encompassed… every instrument is played with skill and sensitivity.”
Folk London Magazine 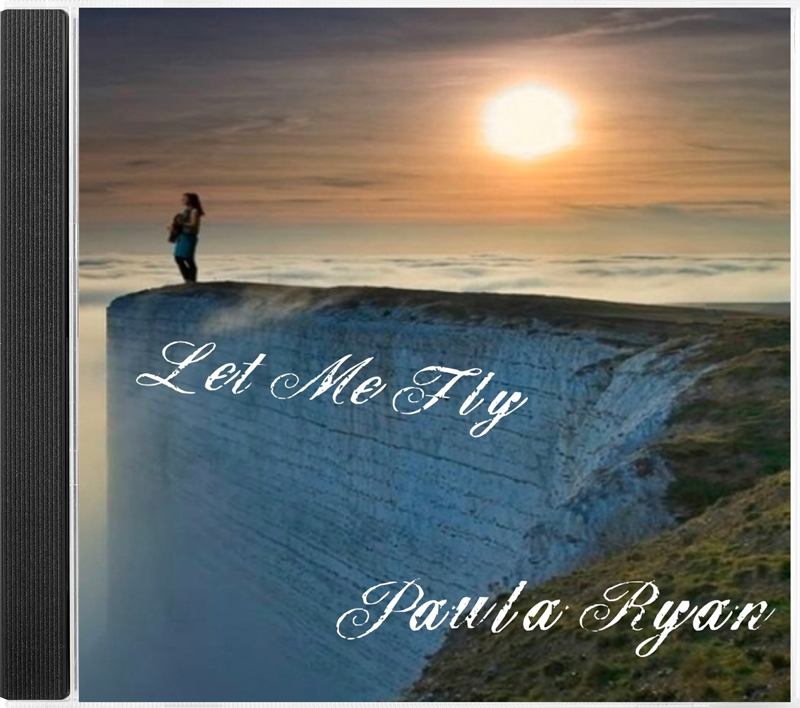 “Let Me Fly is an album of beauty and attraction, the Gaelic voice haunting the imagination and one that has truth within its soul.”
Liverpool Sound & Vision

The air of mystic vibration quivers gently in the air, the sound of artistic Gaelic freedom plays with anticipation and the deep longing that fierce independence can bring. The insightfulness and passion for Irish roots is nothing short of overwhelming, the emotions of being able to implore the words Let Me Fly forever entangled in the heart; three words that are ingrained in the soul of Paula Ryan and to whom are thrust into the heart of anyone spending time listening to this, her latest album.

There is nothing finer than knowing a musician actually lives by the words they sing or project into the world, that their belief is strong, unbound by constraint and chains, that their choice of song they choose to present to the world is not determined by committee but by natural love and desire. It is a feeling of joy that is shared and multiplied whenever the listener is found within the vicinity of the song.

It is to the ability to be inspired that makes a person fly, the cynical and the unimaginative back away from such fancy and whimsy but for the bold and the stimulated, the world is an open playground not fenced or dependent on money to create its soul, it only asks to be free and freedom is stamped throughout Paula Ryan and her music.

In writing all but one song on the album, by performing the beautiful lyrics and the often moving pieces, Paula Ryan’s words float like a wisp of cloud caught on a gentle breeze. However that freedom hides a great tale, there is an anger caught unawares that haunts the lyrics and whilst it might not be obvious if only using music as a background, by not paying attention, the force of that wind shifts and the gale it creates, the storm in the heart it begins is worthy and absolute.

In tracks such as the album opener A Thousand Smiling Faces, the dedication to Nelson Mandela in Lion in the Cage, Don’t Cry and Castaway, the music is rich and with a sense of outpouring of generosity; it enthuses the listener to dig a little deeper in their appreciation for what has been achieved and without doubt stands a monumental testament to the soul of Paula Ryan and her creative prowess.

Let Me Fly is an album of beauty and attraction, the Gaelic voice haunting the imagination and one that has truth within its soul.

“Paula Ryan is a unique voice in the contemporary folk world and as a writer has a magpie style where she takes all influences around her and brings them together in bewitching and beguiling fashion.”
Classic Rock Society Magazine

Irish singer/songwriter Paula Ryan is a unique voice in the contemporary folk world and as a writer has a magpie style where she takes all influences around her and brings them together in bewitching and beguiling fashion. Proving how insanely talented she is, not only did she write or co-write all the songs on this album, she also arranged the album as well as providing the vocals, guitars, tin whistles, bodhran, saxophone and percussion amongst many other instruments.

A theme throughout this enchanting album is storytelling, whether it is that of female aviator Amy Johnson in the wonderful title track, or the wonderful killer last verse in the humorous and catchy Honest John to the heartfelt tribute to Nelson Mandela on Lion In A Cage, Paula sings with conviction and writes from the heart.

This release should bring her talent to a wider audience and is a well-honed, crafted record that will bring joy to all those who hear it.

“This CD is a great introduction to a strong talent in writing and performing and certainly sounds as if her live performances would be worth seeking out.”
Irish Music Magazine

Paula is a new artiste to me but this 12-track CD is a great introduction. She hails from County Tipperary and from her website I note that I am more than a little behind the times. She has amassed quite a following and has a good number of gigs under her belt.

The album is called Let Me Fly and with the quality of the writing and performance on offer here there is nothing that will stop her flying or the CD’s flying off the virtual shelves. She welcomes us with A Thousand Smiling Faces a multilingual song that has a beautiful lilting sound as its lyrics waken us to a thoughtful writer and performer. She continues with the title track that has a lovely light feeling that reflects the sentiments of the title. One cannot but smile listening to this enthusiastic performance.

There is always a stand out track that a reviewer returns to again and again on any CD and with Ms Ryan that must be Suantrai Donnacha and one is delighted to find that we get the song twice once as above as Gaeilge and then in English as Donnacha’s Lullaby. It is fascinating to listen to each in turn hearing the nuances in sound and lyric. Havin the Craic is a song that has a sort of “mouth music” feel that rolls over us like a brook over pebbles. Black Swan has that haunting sense of being an old folk song revitalised and augers well for the future of Paula as a writer of songs with great potential to become standards of the folk scene.

Her song The Funny One is yet another of those excellent songs that while expressing what may be the personal actually give us a sense of the universal because everyone everywhere has their own “funny one”.

This CD is a great introduction to a strong talent in writing and performing and certainly sounds as if her live performances would be worth seeking out.

We use cookies on our website to give you the most relevant experience by remembering your preferences and repeat visits. By clicking Accept All, you consent to the use of ALL the cookies. However, you may visit Cookie Settings to provide a controlled consent.
Cookie SettingsAccept AllReject All
Manage consent

This website uses cookies to improve your experience while you navigate through the website. Out of these, the cookies that are categorized as necessary are stored on your browser as they are essential for the working of basic functionalities of the website. We also use third-party cookies that help us analyze and understand how you use this website. These cookies will be stored in your browser only with your consent. You also have the option to opt-out of these cookies. But opting out of some of these cookies may affect your browsing experience.
Necessary Always Enabled
Necessary cookies are absolutely essential for the website to function properly. These cookies ensure basic functionalities and security features of the website, anonymously.
Functional
Functional cookies help to perform certain functionalities like sharing the content of the website on social media platforms, collect feedbacks, and other third-party features.
Performance
Performance cookies are used to understand and analyze the key performance indexes of the website which helps in delivering a better user experience for the visitors.
Analytics
Analytical cookies are used to understand how visitors interact with the website. These cookies help provide information on metrics the number of visitors, bounce rate, traffic source, etc.
Advertisement
Advertisement cookies are used to provide visitors with relevant ads and marketing campaigns. These cookies track visitors across websites and collect information to provide customized ads.
Others
Other uncategorized cookies are those that are being analyzed and have not been classified into a category as yet.
SAVE & ACCEPT
Select Currency
EUR Euro
GBP Pound sterling